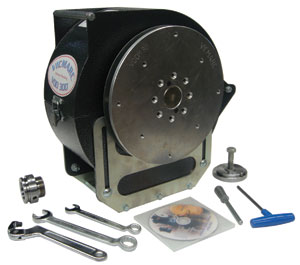 In 2009 I bought the Vicmarc oval chuck. Here are the steps I use to turn an oval and some of the things I have learned about oval turning.

Steps to turning an oval bowl. At first I used solid blocks of dry wood to turn the oval. I realized fairly early on this was the hard way to turn an oval. I now start with wet wood and do as much of the turning wet as I can. Similar to what I do with round bowls.

After I have the blank chainsawed out of the log I use dividers to mark the ends round. Then I bandsaw the blank. Next I put the blank on the lathe between centers. I turn a tenon on the bottom to fit the Talon chuck. I turn the blank over and turn a recess in the top to fit the expanding Talon jaws.

I now mount the oval chuck on the lathe bolting it to the bed. Be sure the frame of the chuck is parallel to the bed of the lathe. The oval manual shows how to adjust the oval offset in the chuck. The chuck can be set from 0 offset to 30 mil offset. The math here is pretty easy. Multiply the offset by four. Thus a 25 offset equals 100 mil difference in the length and width (just about 4 inches). A 30 offset equals 120 mil or about 4 5/8” difference between length and width.

Size changes the shape of the oval. Here are three 30mil offset ovals (to the nearest inch for simplicity): 3” x 8”, 8” x 13” and 13” x 18”. All three shapes would be turned at the same 30 offset but as the oval gets bigger it gets closer to round. If I could turn a 45” x 50” oval it would appear almost round, a 3” x 8” oval would be very elongated. Lesson one: the bigger the offset the harder the oval is to turn and the more radical the wood movement. Thus a 20 offset oval is easier to turn than a 30 offset oval of the same length.

Using a c-clamp I clamp the internal frame to the nine o’clock position. There is an indent showing where nine o’clock is. Next I mount the blank with the master line vertical or perpendicular to the bed. Thus the chuck is locked at 9 o’clock and the master line is on the 6 – 12 o’clock line.

With the lathe off I now rotate the blank by hand using a pencil on the tool rest to mark the true oval shape on the bottom side of the blank. I then I take the blank to the bandsaw and bandsaw the blank oval shape.

Time to turn. I remount the blank with the master line vertical and the chuck set at 9 o’clock with the top of the oval bowl to the headstock. I set the tool rest so that my gouge cuts at 9 o’clock. I use

the term 9 o’clock because it is simple and people know what I am saying. The Germans have a better term: the point of tranquility. It is the one point on the oval where the wood is smooth and can be turned at. To make it a little more difficult, this point can be adjusted up and down by either rotating the blank on the Talon chuck or adjusting the oval chuck (directions are in the manual). With the rough blank it is a little hard to see this point. I put a light shining on the side of the blank and turn the lathe on. The point of tranquility forms an X in the shadow. I use a hose clamp to fix the height of the tool rest. Important. Always fully rotate the blank complete around by hand to be sure it clears the tool rest. You will now learn that it takes two full rotations of the lathe to make one rotation of the oval chuck. I now turn the outside of the blank. This is fairly normal turning.

I go to back to the oval chuck now and mount the blank with the bottom tenon in the oval chuck. Again the chuck is set to 9 o’clock and the blank is vertical. Again, rotate the blank to make sure it clears the tool rest. With the light behind the blank turn the lathe on. Now 9 o’clock/point of tranquility will show up as a sharp X on the outside of the blank. Set the tool rest so the gouge is cutting exactly at this point. If the inside oval is not cut at the same point as the outside, the walls of the oval will not be uniform. (this could be used for some interesting shapes if one wanted to have a swashed shape.)

Lesson three. “Riding the bevel” is nearly impossible on the inside of the oval, especially on the wall of the oval.

Once the tool rest height is fixed I turn the inside of the blank oval. The center has already been turned out so you are just turning the ends. This is an interrupted cut and is somewhat difficult. We are turning wet wood here so I leave the walls about 1 1/4” thick with the top edges rounded. There will be a ridge on the bottom at each end that can't be turned out now. The inside center tenon is left because it is needed for finish turning later. I use a chisel and a dremel to remove these end ridges. After the wet blank is taken off the lathe I wax the end grain and dry it like I dry all my blanks.

Finish turning. The oval blank will have moved during the drying process. I use a big disk that is on a face plate and put it on the lathe. I bring the tail stock up and hold the oval blank on the disk with the top of the oval on the disk (towards the headstock). I measure the two ends and the two sides and get the blank centered. Once centered, I turn the tenon on the bottom true round. I next put the Talon chuck on the lathe and put the bottom tenon in the chuck. I now true up the tenon on the inside of the oval.

Next is the hardest part, turning the inside wall of the oval. Refer to lesson three, riding the bevel is nearly impossible. I use a 1/2” gouge and turn the first inch from the rim. I check the wall thickness around the oval to see that it is uniform. If it is not, it means the tool rest is at the wrong height. Make the necessary adjustment. I turn the first inch of the wall to finish thickness. I then work my way down the inside wall in steps. I change to my 5/8” gouge because it has a blunter bevel that lets me turn around the inside corner. As the tool approaches the center section of the oval the wood movement becomes radical. The wood is going almost straight up and down, not round. And the wood is never coming straight down on the tool, it is always coming at an angle to the tool edge.

Note. There is no center in an oval. There is a center line that is equal to the difference between the length and the width of the oval. On a 25 offset, the center line will be roughly 4” long. Lesson four. The closer to center the tool gets the harder it is to control. Near the center line the gouge will stop cutting and I have to change to a half round scraper held flat on the tool rest.

What I have described above is how to free hand turn an oval. The up side is that the end grain on the inside of the oval bowl is cut clean, the downside is that there are ridges that will have to be power sanded out. If I was in production of ovals I would use a captured bar system with the tool held exactly at 9 o’clock. The upside to this method would be uniform walls on the oval, the downside would be tear out in the end grain. I wanted to learn the skill of free hand turning oval bowls.

With the inside of the oval bowl turned I get out the power sander and start sanding with 80 grit disks.

I rotate the oval by hand and do most of the sanding with the lathe off. Once the ridges are gone I turn the lathe on very slow and power sand (at 9 o‘clock). After that I hand sand starting with 80 grit and work my way up to 320 using walnut oil during the sanding.

Once the inside is finished I remove the oval from the chuck. I put an oval scrap board on the chuck with the master line vertical. I then cut an indent in the scrap board fitting the rim of the oval. I now use six dog ears of wood and screws to hold the oval bowl to the scrap board. Once it is mounted I go back to the round lathe and remove the tenon from the bottom. Then back to the oval chuck. Remember, I put a pencil line on the bottom when I was turning the outside. I need to match tool rest up with this line so that the tool edge cut right at the pencil line. Making sure the tool rest is clear of the oval, turn the lathe on. The pencil line will show a clear X at 9 o’clock. Set the tool rest to the height that the tool edge is cutting at the X. Turn and sand the bottom. Remove the oval from the scrap board and it is finished.

A final note. Because the round motion of the lathe is converted to oval motion on the oval chuck two things occur. In normal bowl turning I watch the top profile of the bowl and not the tool to get the shape of the bowl. This is impossible on the oval chuck. The bowl blank is a big blur except right at 9 o’clock/point of tranquility. I have to watch the point where the tool edge touches the wood. To check the shape I have to turn the lathe off and look at the shape with the bowl blank stopped. Second, because round motion is converted into oval motion, the foot speed of the wood going past the tool edge goes up and down twice with each rotation. Thus, the pressure on the tool edge is always changing.

Oval turning using the Vicmarc oval chuck is challenging but the shapes can be very nice and accomplished no other way. My best oval came out by using the feather in a long crotch running down the middle of the oval. As with any skill, it simply takes time standing at the lathe to learn it.